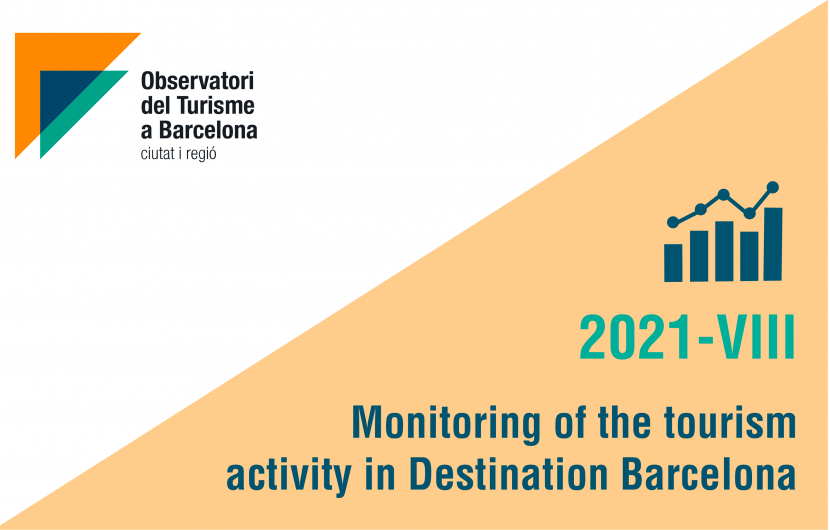 In August 2021, the tourist activity in Destination Barcelona has kept growing due to the easing of the restrictive measures to travel. The activity is currently higher than in 2020, but still way behind the 2019 level.

During August, the accommodation offer in Destination Barcelona has kept improving: 73 establishments (+4.7%) and 7,000 beds (+5.1%) have reopened.

In Destination Barcelona, the hotel establishments’ demand has increased by +20,4% (MoM), while the overnight stays have grown by +39.5%. The average stay (+0.4 nights) and the occupancy rate (+13.7pp) have also increased, reaching 57.8% on the second case. Despite these growths, which have been higher in Barcelona city than in the region, the activity is still between -40% and -50% behind 2019. However, in Barcelona region, campsites (-24.2% in overnight stays, var. 21/19) and particularly rural tourism (-6.4% in overnight stays, var. 21/19) have been those that have recovered the best.

Improvements in the case of the homes for tourist use have also been observed: the overnight stays have increased by +24.9% compared to the previous month and the loss over 2019 has been lower than in the hotel establishments (-14.1% vs -42,0%).

Barcelona Airport has registered an increase of +25.6% in passengers compared to July. Meanwhile, in Barcelona port, ​​the arrival of cruise ship passengers is still over -90% (var. 21/19), in contrast with the growth of ferry passengers: more than 270,000 passengers have been registered in August, almost doubling the previous month's records (-16.1%, var. 21/19)

As for the cultural facilities visitors of the city of Barcelona in August, they grew almost +25% (MoM) partially thanks to a slight increase of foreign visitors (+5pp).

International tourism has remained over domestic tourism in Destination Barcelona (71.1% in hotel establishments), because of the high prevalence of foreign tourists in Barcelona city (78.5%), where it must be noted that French tourists have increased by +101.8% (MoM), even surpassing the Spanish tourists. Noteworthy is also the upturn of the Americans during the last two months, ranking fourth in the cumulative ranking from January to August. Despite all of this, it must be highlighted that the arrival of national tourists in the whole of Destination Barcelona in August has been higher than in the same period of 2019, particularly in Barcelona city.

At Barcelona Airport, the arrival of passengers on domestic flights (38.6%) has been lower than the internationals (61.4%). With accumulated data from January to August, passengers traveling from France, Italy, and Germany have been the most frequent flyers after the domestic ones. Despite the imposed measures to contain the British variant of Covid-19 during the first months of the year, the UK passengers have climbed two places in this ranking during the last month, reaching the sixth position.

As for the economic impact of tourism in Barcelona city, purchases with bank cards in the city shops also show how the tourist activity has kept increasing so that in August, the YoY variations (var. 21/19) have been around -7%, while those of July, around -16%. The expense during the stay per person in the Destination as a whole has grown to €445.5 in June (+13.3% MoM) and a clear increase in the proportion of international cards use has been observed too.

Finally, the tourism activity in the job market has slightly improved in August: while in Destination Barcelona the registered unemployment has been lower (-10,8%, MoM), the new contracts have fallen back again. 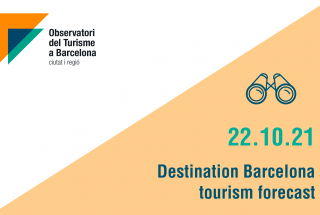 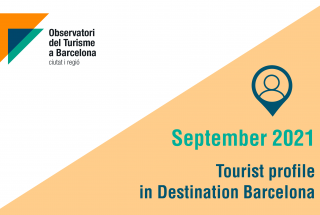 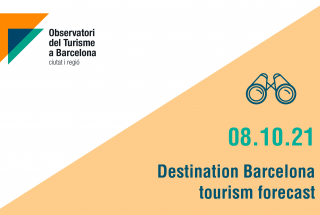